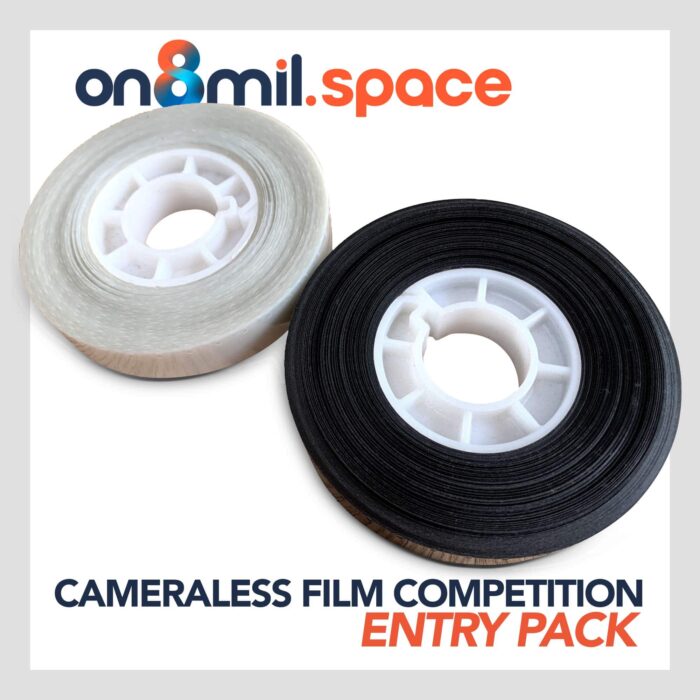 You are buying:
• 25 foot of single perf 16mm leader, black triacetate on a core
• 25 foot of single perf 16mm leader, clear triacetate on a core
• Enrolment into our Cameraless Film Competition. Please see On8mil.Space for more details
• Includes a 2.6K HD scan to Apple ProRes .mov for subsequent editing and final submission of your film
• Includes optional metal scribe for etching into your film emulsion and a set 12 permanent fine tipped Sharpies in various colours for adding colour to your films
• Free return of original manipulated film
• Deadline for submission of films for scanning: 15th December 2020
• Please see the info at the bottom of this page or for full details of competition rules, deadlines and T&C visit: On8mil.Space

The moving image is an illusion created by a series of images played in a quick succession. Although usually done with a movie camera or computer, there are endless possibilities to create a moving image.

The ‘Cameraless Film Competition’ is the opportunity to create an animated short film by directly manipulating the surface of 16mm film materials. By purchasing our entry pack, you’ll receive two rolls of 16mm film leader, each 25 foot in length, one coloured black, the other transparent. You can also enhance you entry pack with additional tools which we’ve made available when purchasing, such as a metal scribe for scratching directly into the films and an assortment of fine tipped permanent coloured pens.

This is the perfect isolation activity. You won’t need to go out and film anything.